While indulging in my procrastinating habit on Youtube, I stumbled onto a brilliant BBC Maestro video of the writer Alan Moore urging aspiring scribes to “not only read good books, read terrible books as well.”

He says the big reason for doing that is to have your tastes tested and confirmed, so that you can then utter the immortal phrase “Jesus Christ, I could write this sh*t.”

Moore reckons reading terrible books – works we either personally dislike or are perceived negatively by others – is a much more informative way of learning about writing than simply just reading books we either enjoy or feel we should enjoy.

Some of my favourite books of all time are those dismissed by critics and cultural snobs as airport fiction, immature pablum, or derivative by the numbers hack jobs that have all the nourishment of confetti.

Still, reading :”terrible” books has taught me a few things, like…

The Hunt for Red October

Tom Clancy’s 1984 novel is said to have invented the “techno thriller” where deep descriptions of gadgets are as important to the story as character and plot.

Published by the obscure Naval Institute Press when no one else would give him a chance, Clancy went on to sell more than four million copies worldwide, earning praise from then U.S. President Ronald Reagan before a film starring Sean Connery and Alec Baldwin was created from the book.

THFRO is workmanlike, awfully paced, and does far more telling than showing. But its action scenes are – to me – unsurpassed for their realism, pace, technical mastery, and sheer enjoyment.

When I wrote Locust Summer, my style was literary, and focussed on character. But when I wrote the scenes of harvesting, I went back to Clancy for tips on how to get the mix right between machines and people. The main thing I learned from him was that it doesn’t do to dwell on the technical stuff. Just write what it is and what it does, having confidence that the reader will understand. The more you explain of something technical, the less it will be understood.

The Power of One

Bryce Courtenay was one of the best selling Australian authors of all time. His debut novel The Power of One was translated into 18 languages, sold more than 8 million copies, and was adapted into a feature film.

But speaking to the news site Crikey in 2010, Courtenay told of how his writing was often dismissed by literary critics as worthless:

Despite its success, Courtenay’s writing has been widely panned – but he was the first writer that I truly connected with.

I must have read the Power of One six times in the year I turned 12. My copy is faded and torn with a cracked spine. And yes, now that I’m older and have read more widely, I can see its faults – that the writing is often laboured, too long in many places, and has all the subtlety of a politician’s Question Time joke.

But I wouldn’t change a single word. It’s beautiful story that’s well told. I like that there is no literary pretence. That everything is explained.

When I write, I have different goals to Bryce Courtenay, and a different style. But I will never forget how he taught me to speak to a reader and cast a spell over them. To say what you have to say with confidence, never mind the rest. Just tell the story, and let it breathe. 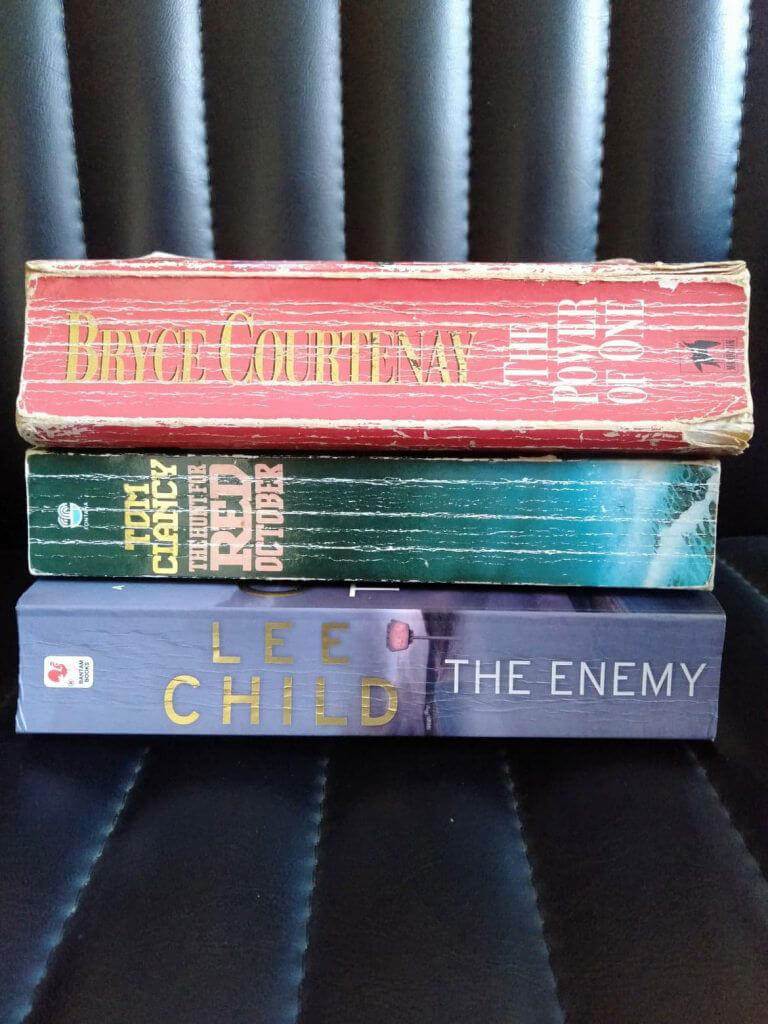 ‘They’ve been read a few times…

Pick one. Any of them. There’s more than a dozen now, and they all have one thing on common aside from the main character – every chapter ends strongly.

Sometimes they are cliffhangers, but most of the time Child’s chapters build to a climax that sets up the next one.

This creates a sense of urgency in the book, propelling the reader through the narrative with the “just one more” attitude we all love when immersed in a book.

The Reacher books are not the first I encountered using this technique, but they are the ones that taught me to do it.

Sure, it’s not literature – but these books are brilliantly done for what they are.

And Locust’s chapters all end strongly because I had the lesson front of mind.

I think this is along the lines of what Alan Moore was talking about in that BBC video.

The temptation for snobbery and elitism in writing and reading terrible books is always there. But for writers, I think it’s poison. We have to be gluttons, and eat widely and often and well, sharpening our palates to every flavour and texture before we create our own dishes to serve.

If you liked this blog post, it’s a taste of the kind of thing Im going to teach in an online writing course that’s launching soon.

No BS. No pretence.

Accessible, relatable lessons in writing borne from experience in creating my debut literary fiction novel Locust Summer and a near-20 year career as a journalist.

If that sounds good to you, sign up to the waitlist, and you’ll be the first to know when it drops.

END_OF_DOCUMENT_TOKEN_TO_BE_REPLACED

How to tell the end of a story

The end of a story should be straightforward. You tie up all the loose ends, make sure everyone’s accounted for (if they survived!) and ride off into the sunset. Only it’s never that straightforward, at least in my experience. This is on my mind for two reasons: I’m...